BARDSTOWN, KY – Keifer Gilbert, Bartender at Bitter & Twisted in Phoenix, announced as the Heaven Hill Brands and Liquor.com Denver finalist for the 2019 Bartender of the Year Competition. Gilbert won first place, $1,000 and a trip to the finals at Half Mile Farm in Highlands, North Carolina.

In the second round of the semifinal competition, contestants created the inspired cocktail submitted as a recipe in the preliminary round. Gilbert crafted the “State 48” inspired by the diverse culture of his home state of Arizona –  from the southwest vibe of Lunazul to the tropical, tiki feel of Domaine de Canton paired with citrus (see recipe at end of release).

“This cocktail really helps tell the story of the diversity of Arizona. A quick car ride two and a half hours north from the state’s capital Phoenix and its heavy desert terrain, you can find yourself surrounded by forest in the Flagstaff area. This has always been one of my favorite things about living here, nature has always been my escape and the best way for me to personally recharge,” said Gilbert. “The drink is prepared in a bit of a tiki format, but strays away from the typical arrangement of exotic, tropical ingredients. The drink truly drives home what I find to be the biggest allure of tiki culture, the escapism aspect. One sip of this drink and I feel like it can transport someone to all of these places, and they can get a feel for all of the smells, tastes, and cultures that have helped shape me into the person I am today.”

Alex Jump of Death & Co Denver won second place and $500. Six semifinalists competed regionally in Denver on Monday, March 25 at the American Bonded. Bartenders competed in three rounds, the first two featuring the classic cocktail and inspired cocktail from their preliminary submission. For the final round, bartenders created a custom drink for a fictional bar menu using a minimum of 1.5 ounces of at least one Heaven Hill brand not previously featured in one of their cocktails including Domaine de Canton French Ginger Liqueur, Elijah Craig Small Batch Bourbon, PAMA Pomegranate Liqueur, and Rittenhouse Rye Whisky, as well as Dubonnet Rouge Aperitif, Sacred Bond Brandy, or Lunazul Tequila. Contestants and judges were then invited to a family dinner at Morin, where 2017 Bartender of the Year Finalist McLain Hedges is Beverage Director, and professional development with Bryan Dayton, Co-Owner and Beverage Director of OAK at Fourteenth in Boulder. Dayton created a cocktail utilizing Heaven Hill products and spoke to his inspiration behind it, as well as letting passion drive your career and the direction of cocktail culture in the future. 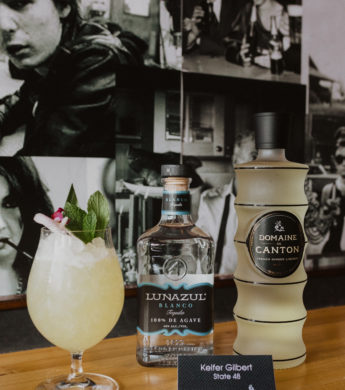 Muddle the serrano chile (the chile should not be any larger than the width of a quarter) build the rest of the ingredients in a mixing tin. Add ice, Shake for 5-7 seconds. Double Strain over crushed ice into a hurricane. Garnish with pineapple leaf, orchid, and mint.