A natural fit for the Evan Williams Flavors lineup, apple has seen heightened success across the brown spirits category as the flavor surpasses honey in popularity according to IWSR. As the flavored whiskey category has continued to expand, both established flavors, like honey, and newer entrants, like Apple, are propelling the segment to nearly 10 million nine-liter cases, showing that flavored whiskeys are still a key growth opportunity. The addition of Evan Williams Apple rounds out the flavor offerings within the Evan Williams flavors franchise, providing retailers an opportunity to build on the franchise success, as evidenced by Evan Williams Honey, which grew at seven percent over the last 12 months.

“Evan Williams Apple is an approachable flavor that stays true to the quality of Evan Williams Bourbon and personality of the brand,” said Julie Cole, Evan Williams Brand Manager. “We look forward to bringing in new consumers to the Evan Williams franchise, as well as giving our current consumers more choice.”

Evan Williams Apple will be supported by the “Picked Fresh. Poured Smooth” tagline, as well as a dedicated media program and point-of-sale products throughout summer 2019. Available in 750ml and 50ml sizes, Evan Williams Apple SRP is priced in line with the flavors family at $14.99. 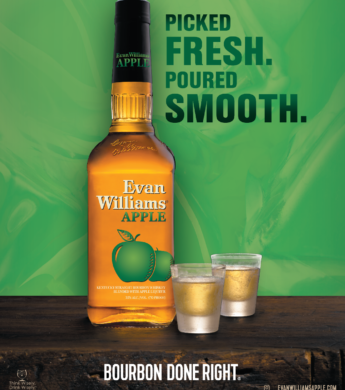 Enjoy Evan Williams Apple in one of the following refreshing cocktails:

Build Evan Williams Apple and cranberry juice in a cocktail glass over ice. Add a splash of club soda and garnish with a cinnamon stick. ​

ABOUT EVAN WILLIAMS: The flagship Bourbon of Heaven Hill Distillery, Evan Williams is among the leaders in the rapidly growing American Whiskey segment as the world’s second largest-selling Bourbon. Evan Williams is a proud sponsor of Major League Baseball and the World Series, first forming a partnership with the national pastime in 2016. As an American-made and American-owned brand, Evan Williams has recognized true American heroes through their exceptional stories of honor and bravery on special edition American-Made Hero labels for the past four years. The Evan Williams Bourbon Experience (www.EvanWilliamsBourbonExperience.com) celebrates the legacy of Evan Williams through an immersive visitor’s center experience which brings to life the history and tradition of Kentucky’s native spirit as an official stop on the Kentucky Bourbon Trail.