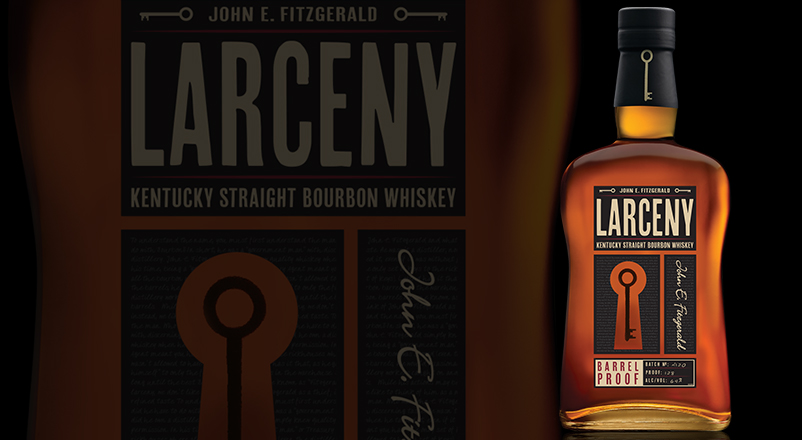 First launched in 2012, Larceny is one of the most successful new-to-the-world Bourbons in the past decade, enjoying both critical and consumer acclaim. Leveraging the success of the mainline brand, Larceny Barrel Proof offers whiskey fans an opportunity to taste Larceny as Heaven Hill’s Master Distiller does, straight out of the barrel. Each release will be bottled at barrel proof, non-chill filtered and available at a suggested retail price of $49.99.

Larceny Barrel Proof will be an ongoing offering released three times per year: January, May and September. Each release will have varying proofs and consist of barrels aged six to eight years. A naming convention for the release is shown on each bottle. The alpha character in the naming convention designates which batch of the year that bottle came from, the numeral that follows represents the month of the release, and finally the last two digits indicate the corresponding year of the release. For example, the first release will be A120, with “A” representing the first batch of that year, “1” representing January, and “20” representing the year 2020.

The new release will be offered in the traditional distinctive Larceny pinched-waist, flask-shaped 750ml bottle, with the hallmark skeleton key logo and John E. Fitzgerald signature carried by a black label. The lower face label denotes “Barrel Proof” in red and includes the batch number, proof, and alc/vol for each particular release.

“Larceny’s wheated Bourbon mashbill delivers a taste profile that is very approachable and smooth, a true crowd-pleaser. The addition of this non chill filtered, barrel proof offering to the Larceny family allows us to showcase a deeper character, richness and depth of flavor from our wheated Bourbon mashbill,” said Heaven Hill Distillery Group Product Director Susan Wahl. “Drawing from its lineage within the Old Fitzgerald family, Larceny Barrel Proof is an opportunity for Bourbon fans to taste a historical ‘wheater’ in its purest form.”

Larceny is the heir to the wheated Bourbons that make up the historic Old Fitzgerald franchise acquired by Heaven Hill Distillery in 1999. Continuing the tradition of Old Fitzgerald using wheat in place of rye as the secondary grain in the mashbill, Larceny uses more wheat than any of its competitors for a softer, rounder character. The brand is inspired by the history of John E. Fitzgerald, who as a treasury agent in the late 1800’s and early 1900’s was one of the only people legally allowed to carry the keys to the barrel storage rickhouses. With a discerning palate for fine Bourbon, John E. Fitzgerald often used his rickhouse keys to gain access to some of the finest Bourbon barrels for himself. Those barrels from which he chose to help himself were often referred to as “Fitzgerald barrels” around the distillery.