Hpnotiq Liqueur, the storied spirits brand known for its electric blue hue, is bringing back the original packaging that gained notoriety in hip-hop artist Joseph “Fat Joe” Cartagena’s ‘Lean Back’ music video. Launched in 2001, Hpnotiq was quickly embraced as a cultural mainstay, becoming one of the most successful new product introductions in the history of distilled spirits.

The limited-edition “OG” Bottle will be available nationally beginning in June in the 750ml bottle, and in select markets as a 375ml flask and 50ml bottle. The OG package utilizes the original Hpnotiq logo and signature eye-catching blue hue made famous when Hpnotiq burst onto the scene in the early 2000’s. The OG program will also include retail support with a boom box display piece, Fat Joe partnership posters, and retro-logo point-of-sale.

“Hpnotiq is excited to partner with Fat Joe almost two decades after the original success of this unique duo within music and nightlife,” said MaryCrae Guild, Hpnotiq Brand Manager. “Hpnotiq is paying homage to its roots while also celebrating the brand’s future as it continues to grow within the segment. Since 2001, consumers have chosen Hpnotiq as a staple in entertainment.” 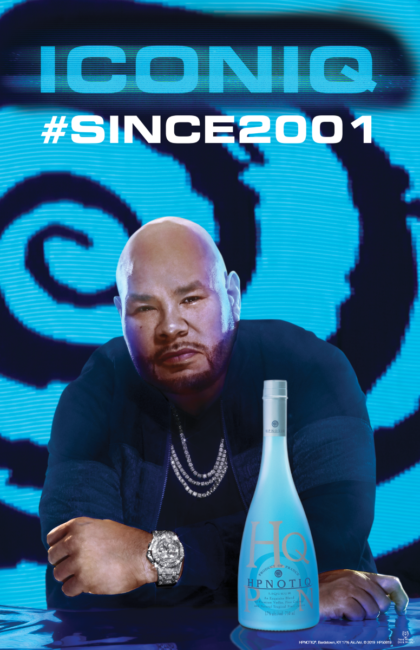 As a unique part of Hpnotiq’s history, the brand is partnering with Fat Joe to release a comedic “OG” video series imagining Fat Joe as the brand’s “Creative Director.” The OG campaign provides fans with a taste of nostalgia while enjoying the cultural relevancy of Fat Joe’s latest hits as a rapper, actor and entrepreneur. The launch of the hilarious “OG” video series features the NYC rapper running Hpnotiq’s headquarters, from experimenting with summer cocktails in the R&D lab to helping record the company voicemail. View the first video here.

A premium blend of exotic fruit juices, French Cognac and a touch of vodka, Hpnotiq is growing at six percent nationally. Hpnotiq is 17% alc/vol and the “OG” Bottle will be available beginning in June at select stores nationwide. For more information about the “OG” campaign and limited-edition bottle, visit @Hpnotiq on Instagram, Twitter and Facebook or email info@hpnotiq.com to find your local retailer.